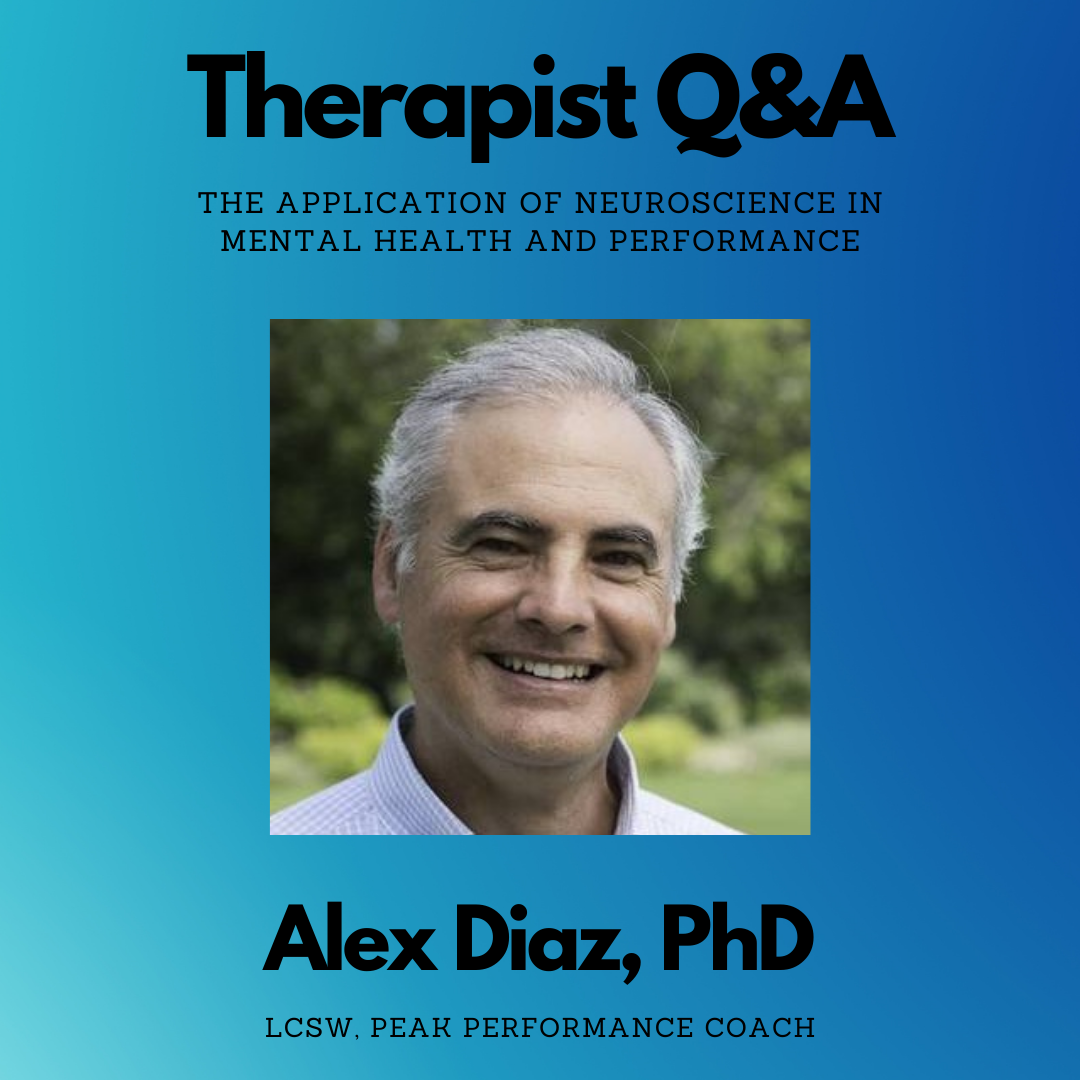 Dr. Alex Diaz is a sport psychology and mental wellness consultant to collegiate, school, and elite athletes. He teaches cognitive and applied neuroscience knowledge to empower athletes with effective mindset tools to enhance mental wellbeing, focus, and resilience. Dr. Diaz is a 20-year licensed professional in private practice and his PhD degree focused on mental toughness in collegiate athletes. He is also a member of the USA Olympic & Paralympic Committee Mental Health Registry and a US Cycling mental health provider.

1. What can we learn from applying neuroscience to athlete mental health?

Neuroscience is the study of the structure and function of the nervous system and its relationship with the brain. The application of neuroscience to sports performance allows us to recognize which mental skills to utilize to calm down our stress responses and perform our best. In order to know which mental techniques to use, it’s helpful to understand the evolution of the brain and the brain’s different functions. For example, the older part of the brain, the mammalian, captures non-verbal information from the central nervous system (the CNS controls automatic bodily functions such as breathing, heart rate, the release of some hormones, body temperature, and much more). The newer part of the brain, the neocortex, responds to planning and verbal commands. Breathing practices and mindfulness exercises trigger the mammalian brain while self-talk strategies such as “let’s go!” or “keep running” are understood by the neocortex. If an athlete feels a physiological response to stress, such as butterflies in their stomach, merely telling themselves to “just calm down” won’t do the trick because the neocortex won’t know how to relax the nervous system. Just because we tell our brains to do something does not mean they will do it. Instead, taking a few deep breaths will signal to the mammalian brain that your body can relax. Thoughts and sensations are two different languages that need two different communication styles. If an athlete is looking to feel motivated, then a verbal command will help. If an athlete is looking for ways to calm their nerves, then a non-verbal command such as imagery, mindfulness, or diaphragm breathing will be more effective.

2. From a neuroscience perspective, how are new habits built?

Neuroscience can help us better understand the implicit feelings and emotions that drive our behaviors. For example, have you ever walked by a coffee shop and been tempted to buy another coffee after you’ve already hit your caffeine quota for the day? Seeing the coffee shop triggers implicit memories and emotions associated with your morning coffee. The neurotransmitter dopamine signals to your brain and body that you are about to experience happiness. The anticipated energy of a caffeine boost will make you feel tempted to walk into the store. The more frequently you walk into the coffee shop, the stronger the dopamine response becomes, and the more difficult it becomes to not get a coffee. Telling yourself, “I won’t go in today” takes a lot of determination because dopamine signals an automatic response that verbal cues aren’t able to override. However, we can fool the dopamine response by replacing a cup of coffee with another positive response. For example, we can imagine ourselves feeling the benefits of an energetic and positive mind and body by choosing a different option over coffee. Substituting the image of the behavior we want to change with another equally happy image or sensation (ex. Imagining a successful sports performance) helps us create new habits.

3. What states of being increase athletic performance?

An athlete’s state of being is influenced not only by the final outcome of their performance but also by the approach to their performance. When athletes focus on the present moment rather than on their expected outcome achievements, they are more likely to feel joy and fulfillment. The pursuit of excellence is a state of being that increases athletic performance because it prioritizes effort over ego (an inflated sense of self). When an athlete knows what they want to achieve and fully embraces the ups and downs of each attempt, they are more likely to view their performances as learning experiences. Viewing performances as if they are tests to pass or fail promotes higher stress responses.

4. What resources (books, podcasts) would you recommend to athletes who are curious to learn more about neuroscience and peak performance?

In Pursuit of Excellence by Terry Orlick, PhD

The Present Moment: In Psychotherapy and Everyday Life by Daniel Siegel, M.D.