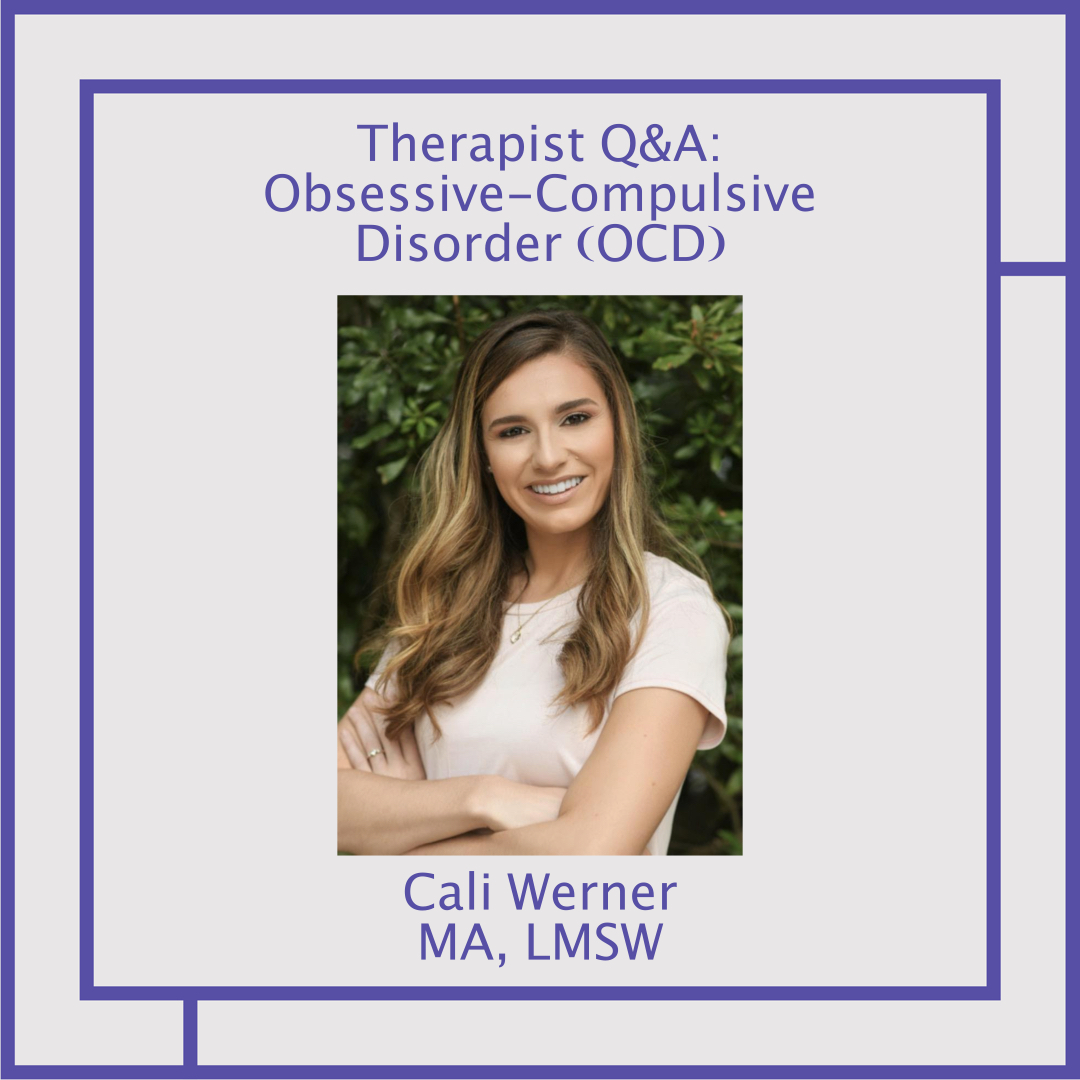 Cali Werner is a therapist (LMSW) with clinical interests focusing on OCD, athletes repetitive and ritualistic performance inhibiting behaviors, anxiety and performance, and mental health stigma. She competed as a Division I collegiate distance runner and recently competed in the Olympic Trials for the marathon in February, 2020. Cali draws on her personal, academic, and professional experiences with OCD to help shed light on one of the most common mental health challenges that athletes face.

1. What are common misconceptions about OCD in athletes?

Common misconceptions I’ve heard in my life, whether it was personally as a collegiate athlete or professionally as a clinician, include, “No wonder you’re so good. It’s because you have OCD” or “You have OCD? Well, it doesn’t look like it because your locker is a mess.” There are a few reasons why these comments are misconceptions. OCD most definitely does not enhance performance but instead is more likely to lead athletes to burnout or even debilitation. A personal example that comes to mind is that I would often have to finish my mileage as a distance runner on an even number or I feared that I wouldn’t win an upcoming race. The reality is that the extra mileage actually made my legs more tired for races when I should have utilized the rest. It also made me dread upcoming races because my pre-race nerves would increase stress, which then increased my OCD symptoms. I didn’t want to do more mileage than what was told of me but I felt like I had to and this is one of many OCD compulsions I gave into related to my sport. The outcome, until I received appropriate Exposure and Response Prevention (ERP), was that I started resenting and even disliking my sport (also known as burnout). The comment about my locker being a mess is an example of the misconception that people with OCD are neat and organized. Obsessions and compulsions range greatly and OCD is not always connected to neatness and orderliness.

2. How do I know if my pre-game rituals/superstitions are healthy or obsessive?

If your pre-game rituals do not become excessive and are something that you have always done, they are likely beneficial for your sport performance. For example, if you know that you have a sensitive stomach, but that you digest oatmeal well, you may always eat oatmeal before a morning competition. You may also try other foods before practice to see if your stomach can handle them rather than trying them right before a competition. These are helpful pre-game rituals. However, let’s say you start off eating oatmeal before every game but then this behavior turns into eating oatmeal before every game, chewing the same piece of gum before every game, having to drink from the same bottle every game and so on, this once helpful routine becomes difficult to manage – not to mention, exhausting. So, this is an example of how OCD superstitions took over a once healthy pre-game ritual and made it time-consuming and unmanageable.

3. What’s the difference between dedication and compulsions?

Dedication to sport is very different from compulsions. Dedication to your sport should make you feel proud, excited, or result in confidence and success. Dedication to your sport may be something that you do not always want to engage in. For example, you may be tired and want to skip practice one day. However, if you do sleep in, you most likely would not have debilitating anxiety about doing so or irrational thoughts about what may happen from sleeping in.

Compulsions are actions you do not want to engage in but feel like you have no other choice but to engage in, due to fear of something bad happening or a negative feeling you want to get rid of. If you have obsessive thoughts followed by compulsions, however, you may fear that if you do not check your door lock four times, you will lose your game.

4. How can OCD interfere with an athlete’s performance and life?

Without appropriate treatment, OCD tends to worsen with time (Abramowitz & Jacoby, 2015). A personal example includes a compulsion that I used to engage in before a race. I would always lock my car four times because the number four was considered an OCD “safe” number. This compulsion took 15 seconds max. However, it grew worse and worse with time. Before I knew it, I was having to tap the starting line four times before a race, tie my shoes four times, high five four teammates, pray four times and so on. So pretty soon, this 15 second compulsion turned into hours worth of compulsions that were debilitating and made me dread race day. Being preventative and getting on top of OCD by engaging in ERP before it gets to this point is extremely beneficial.

OCD does not “go away” but it can be managed with appropriate evidence-based Exposure with Response Prevention. ERP is known to reduce symptoms at a rate of about 61% (Collins & Coles, 2017). Life stressors are known to increase OCD symptoms but if one can stay on top of ERP and challenge their OCD by leaning into uncertainty, they can be in control over their OCD instead of it being in control of them. OCD should never hold anyone back from being able to accomplish what they want to in life. So, if it is holding you back, treatment can help.

6. What is the best way for a coach or teammate to support an athlete struggling with OCD?

If you notice a teammate struggling with OCD, it is important not to shame them, but point them to appropriate support and resources. Let them know that they are not alone in their struggle and that OCD is common and treatable. If they would like resources, you can provide them with the Peace of Mind or IOCDF websites. If you feel comfortable, sharing a part of your personal story that may be relatable could help them feel a little less alone.